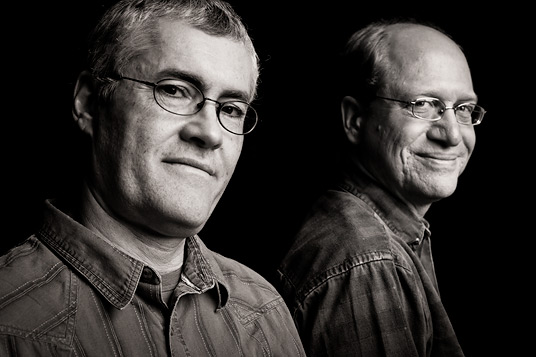 Doug Levey is a professor in the Biology Department at the University of Florida, where he has spent most of his professional life. Doug's research interests are broad but all relate to avian ecology and plant-animal interactions. Natural history is his first love and he has pursued it in various ways, but like many, he was channeled into seeing nature through the lens of ecological theory. This started to change when he read Last Child in the Woods and started a partnership between the University of Florida and our local public school system. A key goal of the program is to hook kids' interest in nature by giving them hands-on, inquiry-based experiences.

Terry Wheeler is an Associate Professor in entomology, with a focus in insect taxonomy, phylogeny and community ecology. He has also been a natural historian probably since his first mouthful of dirt in the early 1960s, although he did not realize it at the time. Terry has the good fortune to work in an institution where organismal biology is still viewed as current and relevant. As such, natural history flows through much of what he teaches and as well as his research. Terry is the director of the Lyman Entomological Museum, a collection of three million unique volumes of biodiversity data, each impaled on a pin or floating in a vial. Our research in insect taxonomy provides resolution to unravel patterns of ecological structure in arthropod communities in habitats from temperate forests to high arctic tundra, and from human-altered, restored and pristine sites.

Doug Levey: The fact that we all know and are dedicated to natural history, but none of us have really been able to clearly define what natural history is. I'd never thought that hard about it. It's one of these things that you know it when you see it, or you understand it when you hear it.

But I'm a little bit worried, actually, about our ability to communicate to the general public what natural history truly is. Part of it is because it's a very personal sort of dimension of who we are, and by necessity, that personality is going to vary tremendously from one person to another. That's not a bad thing; that makes it richer. But it also makes it harder for other people, looking in from the outside, perhaps, to truly get why we're so passionate about natural history.

Terry Wheeler: That's interesting because before I came here I had actually spent some time sitting down thinking about how I define natural history. When I got here it just became a little more fuzzy, just because of all those definitions floating around.

But, the biggest surprise I've had is the extent to which art permeates so many of the discussions and sessions this week, and just how closely tied they are in a lot of our meetings. I think, to a certain extent, that the level to which art runs through so much of natural history makes me feel better about not necessarily being able to come up with a definition. Because it's okay for your definition of natural history to be a personal one. It might vary depending on the kind of question you're asking, or even the kind of mood you're in or place you're in. I think that's always been an accepted way of viewing art, but not necessarily an accepted way of viewing science. Maybe it's okay to not be able to define something as precisely as we sometimes want to.