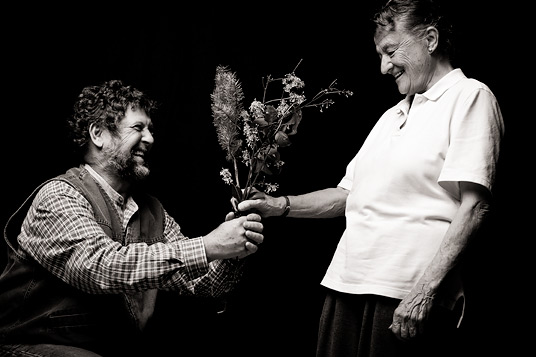 Estella Leopold is professor (emeritus) of Biology at the University of Washington. An active conservationist, Estella co-led the effort that established Florissant Fossil Beds National Monument in Colorado. She was co-recipient Conservationist of the Year from Colorado Wildlife Federation, and recipient of an award from Keep Colorado Beautiful. She helped lead the effort in Colorado to fight the proposed dams in the Grand Canyon, and to prevent oil shale development on federal lands in western Colorado. After Estella's PhD studies at Yale, she worked for the US Geological Survey as Research Botanist until coming to the University of Washington as Director of the Quaternary Research Center. Elected to the National Academy of Science, she has been an active member of the Global Change Board and the Human Dimensions of Global Change Board. Estella served on the national boards for Audubon, Environmental Defense, and The Nature Conservancy.

Gary Paul Nabhan grew up in the Indiana Dunes under the influence of his Lebanese relatives and great naturalists such as Henry Cowles, Donald Culross Peattie and Edwin Way Teale, and did his first "wilderness solo" there at the age of sixteen. After dropping out of high school and working at the Environmental Action national headquarters for the first Earth Day, he went West to Prescott College. It was there that he fell in love with both field biology and narrative natural history. He went on to the University of Arizona for a masters in agricultural botany and a PhD in arid lands resources, simultaneously working in ethnobiology, nature writing and conservation biology. He has published twenty-four books ranging from The Forgotten Pollinators to The Geography of Childhood to Coming Home to Eat. Nabhan currently lives in Patagonia, Arizona where he is involved in collaborative conservation of working landscapes, nectar corridor restoration for migratory pollinators, and genetic resource conservation of native and Mission-era Spanish and Arab food crops.

Estella Leopold: Another wonderful experience was the habit of running about and listening to the woodcock peenting at sundown in the spring. What absolutely marvelous fun that was with my siblings. We'd lay there and get as close to the woodcock as we could when he was up doing sky dance, and he would come down and light near us. We were so excited!

Gary Paul Nabhan: That essay about the woodcock and you out there as a family was my first ah-ha moment about natural history literature. I was working on a farm in Illinois, just south of the Wisconsin border, and had just read that essay about the sky dance. Then, I heard and began to see something in the least of light that I had never witnessed before. And all of a sudden the words from that essay came back to me like they were being enacted in front of me.

I thought, what a remarkable thing to combine such beauty and precision about how nature performs it's daily dance. There was an elegance, it was both precise and extraordinarily beautiful, and it completely reflected the reality of that moment. I just said to myself, that's what I want to do for my career. I want to bring that precision to other people so that they can see the beauty, that the words about such events aren't trivial.

An act of creativity